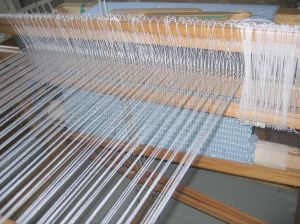 Robin was a fellow performer from Storefront Theater who taught me to use a loom.  Her weavings, like many of her paintings, looked like she had reached into the sunrise and convinced every shimmering hue to come to life through her hands. Threads sparkled, wools blended, and fuzzy threads adhered to make a radiant representation. Anyone fortunate enough to own one of her winter scarves could plan on being stopped several times on the street, so strangers could touch and admire her work. There has never been an artist who could touch my heart and sense of wonder like Robin.

When I first started lessons, I wanted to purchase inexpensive threads because I was a beginner. I reasoned that no one, including myself, would want my products for some time, so why waste money? But Robin stopped me immediately. ‘No,” she counseled, “buy yourself the most beautiful threads you can find, no matter the cost, because part of weaving is nurturing your senses with what you see and what you touch. Feed yourself beauty. You will handle each thread several times, beginning with the warping board, then while dressing the loom, and finally passing the shuttle back and forth to completion. Everything you feel and think goes into your work. Your products radiate your touch and energy, so it’s important to understand the unique power of each weaving.”

A friend knew of a loom stored in a studio space and after several phone calls the owner agreed to let me use it. Things were looking up. I had a studio and loom without cost. I’d tune in Oregon Public Radio and fill the space and my spirit with classical music. It was an uplifting time with Mozart drifting back and forth among the fibers, gently encouraging both inner peace and inspiration.

Weaving was one of the few places that invited my voice into song. I was comforted by sitting alone and filling the room with the years of music I’d learned but rarely sang. It was in one of these precious moods that I reached for a letter I’d stuffed in my pocket. It was from my mother. She had enclosed an article about brain tumors and strongly suggested that I have a physician look at me. “It would explain your behavior,” she wrote. “You’ve never been quite right.”

Tears fell on the threads of my weaving for days from the innocence and malevolence of such a letter. I couldn’t look at it when I cut it from the loom, and didn’t want anyone else to touch such sadness, so I walked outside and dumped it in the trash.

Although never approaching the majesty of Robin’s work, my skill became marketable. I fashioned purses, scarves, table runners and wall hangings. Robin had a tailor’s skill, so her fibers became jackets and dresses displayed in Portland and Seattle galleries, while I used my work to trade for health care and fire wood.

One winter, I took a weaving class at the Oregon School of Arts and Crafts, a very expensive class, but didn’t finish. The faculty made weaving business-like, mathematical and unpleasant. I realized that if I had begun with formal instruction, instead of Robin’s loving hand, I would never have been a weaver. I could not follow directions. I could create a free flowing design in my head, but following a pattern laid out on graph paper in tiny blue colored boxes was hopeless.

I stopped weaving when my allergy to wool became unbearable. Tiny flecks of fibers floated in the air whenever I worked, and wearing a mask felt wrong, so I changed to cottons threads, but felt too limited. It was a sad day when I sold the loom I had finally managed to buy, but Robin’s lessons remained. Feed yourself beauty at any cost.