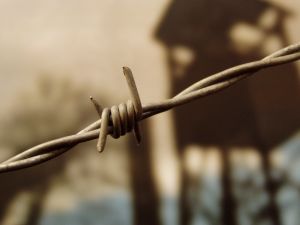 Mid-July, 1964, I was traveling with Jesuit Priests to Czechoslovakia with other students from Georgetown University. We boarded an old bus and were given specific instructions about passports and behavior. When we reached the border, we were greeted by three armed guards who stood fingering their rifles as we shifted nervously in our seats. Wooden watchtowers housed two more guards, feet firmly planted, guns aimed in our direction. The border was laced with barbed wire, and signs I couldn’t read which were meant to fortify the landscape. They could have retired for tea with the threat we intended, but they were of a different mind. We were intruders who could be smuggling contraband or planting bombs. They walked up and down the aisles of the bus, examining one person and the next.

When we were officially waved through, we found ourselves in a small town with empty storefronts. The feeling of poverty was tangible. While the priests went about their business, we walked time worn masonry roads, and waited by an ancient circular fountain which marked the center of town. The visit itself was uneventful, it was the coming and going through military zones that captured my attention and imagination. It provided my first experience of the wealth we take for granted in the states.

School ended in late July, but I was scheduled to remain in Europe until September first. Utterly homesick, I called New York and asked my mother if she could change my ticket for an earlier arrival. I would attend music school in Cambridge shortly after I returned and wanted time to adjust.

Sweetheart, this is the chance of a lifetime.

The phone crackled and buzzed as I pushed my hand against my left ear to shut out exterior noise.

What did you say? I gave the phone my complete attention.

I said, stay where you are. Enjoy it. You’ll be back soon enough.

I knew she was right, but the years at boarding school created a feeling of a being a homeless pilgrim and I had, quite frankly, reached my limit. My heart sank, as I replaced the receiver and prepared to continue to Italy.

August first I arrived in Rome. I’d been booked into a building run by nuns and shown to an ominous room the size of a train station. Its vast expanse and sparsely furnished interior amplified my feelings of being small and on my own. At one end, a single bed, at the other, a weathered wardrobe, a small desk under street level windows completed the room. Opening outward, the wardrobe revealed a waist length mirror. My image, reflected near a bare ceiling light, provided a startling portrayal of the loneliness I felt.

I examined in detail the sadness in the face I saw before me. Unexpressed feelings took on a life of their own. I felt threatened and powerless to stop them. Was I not privileged and fortunate? How ungrateful of me to be so downcast. I pushed my truth deeper inside and went about the business of distracting myself, which wasn’t difficult as my funds had run out weeks ago.  I was never good with budgets. I blew my money shortly after it arrived on gifts to take back home. To compensate, I made the rounds of expensive hotels and gathered the discarded leftovers that lined the halls on room service trays. I brought them home to fill my cupboard.

I discovered Italian ice cream that summer, “ice” which was the absolute best, ate spaghetti until my waist threatened to spill over the sides of my bikini, wrote at sidewalk cafes, visited the Trevi Fountain, the Colosseum and learned how to say ‘Go Away’ in Italian, to protect myself from the aggressive advances of local men. I traveled on trains to visit out laying areas, and pretended not to understand the language when conductors asked for my ticket, since I had none. Once in awhile, I would meet a diplomat, or a refined stranger who would invite me to their home for dinner. It was a time of being financially creative. When the weeks had passed and I was free to return home, I had acquired too much luggage. I’d bought a black hooded cape in Austria for my mother, lederhosen for my brothers and other gifts I no longer remember. The clerk took pity on my lack of funds and passed me through.