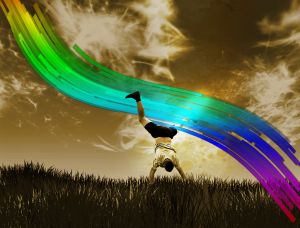 I had a dream on Friday and found my house on Sunday. Here is how it went.

In the first part of my dream I met a man who showed me a house with a room for rent. He was kind and I thought I could live there, although it was not entirely comfortable. It was night and I could smell the sea at a distance. Then he took me through a dark tunnel and into another house. This one was empty and I knew for sure I wanted to live there. The man told me there was no electricity in the house, but I didn’t care. There were six cherubs that played in the room with me. They had short curly white hair and I held them on my lap and against my heart. Then I woke up.

On Saturday I drove to Ojai and looked at a room offered for rent by a gifted artist. I liked the woman and could have lived there, but in the end, was uncomfortable with the idea of living in another person’s house. I had arranged to see a studio, but it could not be viewed until the next day, so I needed to stay overnight. (The dark tunnel that led to the second house.)

When I arrived and saw the grounds and the studio, I knew I had found my home. The landlady told me there was no stove in the unit, only a microwave, (There is no electricity) but I didn’t care. I rented it anyway.  It’s a start, a classy place, even through its small.

There is a sculpture garden in the back with small figures cast in white marble (my cherubs) and is only eight miles from the sea. I can not move in until September first, but have officially landed. Insert the Halleluiah Chorus here!

Now that the house is established, I am waking with visions for my work, much needed creative ideas about putting more joy into the experience and less sense of duty. So there you go. I found my place – or was led to it. Things are happening here, good things, which I thought I’d better share right away, since my last post was a tad raw. Thanks to all of you who have given me encouragement through this trying time. It means a lot.