It started when my kids were very young. There was the wagon and the hill and the blackberry bushes at the bottom. All three of us piled in the Radio Flyer ready for an exhilarating ride down the hill. My son, Clayton, in front, my daughter Kristen next, and I squished in the rear.

This is going to be fun, I said.

Kristen was worried, how are we going to miss the blackberries, Mom?

Don’t worry dear; I’ll just turn before we hit them.

We flew down the hill screaming and laughing. At the critical moment I pulled on the wagon tongue, but it wouldn’t budge.

Oh, we’re in trouble, I yelled and tipped the wagon on its side, only seconds before  lurching into gnarled thorns. Clay walked away laughing, wanting to do it again, but Kristen gave me a look of distrust that said, no way lady. No more rides with you − a look I’ve since become familiar with.

In the spring of 1980 Kristen had her appendix removed. I thought a camping trip to Mount St. Helen’s would speed her recovery, so I made up cots in the back of my panel truck, threw our bikes inside and took off.  We stopped at the visitor’s center before settling in, where I carefully explained that the mountain was one of many sleeping volcanoes on the west coast, all of which were inactive, so she had nothing to worry about.

I have an idea, I said brightly. It’s all downhill to the campground. Why don’t you hop on your bike and enjoy the slope? I’ll follow close behind and pick you up at the bottom. That should be fun!

She rolled up her right pant leg as I untangling colored streamers on her handlebars, so they’d fly free in the wind. Ready?

She started gently with a push and glide, then balanced herself with a careful turn of the pedal. The smell of pine sat on the breeze and played in my hair, as I congratulated myself for finding the perfect vacation spot for Kristen’s recovery. But my serene mood was quickly broken by a piercing scream, and the sight of her bike careening out of control. She moved in abrupt zigzag patterns, back and forth across grass and gravel barely staying erect, going faster and faster. As she approached a curve, she risked a sharp glance over her shoulder, calling for help, panic written on every inch of her face. I sped as close as I dared.

Mom, my chain has come off. I have no brakes! What should I do?

Jump off, I yelled. Jump before you go faster.

And she did. I stopped the truck in the center of the road, bolted from the cab and pulled the still spinning wheels of the bike away from her body. I gathered her in my arms and held her as she wept.

Oh, I’m so sorry, I said as I picked pieces of stone from her right arm and bruised knee. I’m so so sorry.  That was a bad idea.

Three weeks later it rained ash in Portland. It was a clear Sunday in May when I walked out of the Benson Hotel after a workshop and smelled sulfur. Looking skyward I saw plumes of gray snow-like substances falling on cars and sidewalks. Mount St Helens was showering us with debris from her explosion. This continued into the next day, one small eruption following the next. Kristen gave me the look, the − I don’t think I trust my mom anymore − look.

These stories move through her childhood finding a crescendo in Mexico. Kristen was in her twenties; freshly back from living in Greece, when I decided a mother-daughter trip was in order. We were sitting by a swimming pool in a fancy hotel in Cabo san lucas, when a man approached asking if we’d like to parasail. 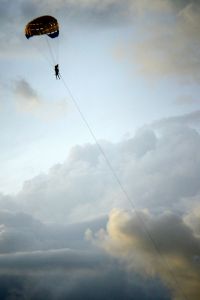 Of course, I said, jumping from my beach chair. Let’s do it. This will be fun!

I moved immediately toward the boat. Kristen came along. We sat in a double harness beneath a brightly colored kite that whisked up with lightning speed 600 feet into the air.  A speedboat pulled us without effort into a vast sky, where we dangled our barefeet above a cobalt sea. The boat, only a tiny speck tethered by a strong black rope, moved beneath us in azure currents next to an endless pale shoreline. I was in heaven. The bird in me was home. At last I knew what it was like for my human body to take flight. I looked over to share my joy with Kristen and found her frozen with fear. She was white, paralyzed, her eyes open in solid circles of panic. Her voice echoed in tiny sounds of terrified half sentences.

Down. Now. Can’t do this. Let me down. Her breathing was shallow, short and full of urgency. Mom get me down NOW!

The men in the boat didn’t look up. I tried. I yelled, but they were too far away to hear. Finally one of them turned. I waved and gestured.

We need to come down, I screamed, but my voice was lost in the wind.

The driver smiled and waved, happy to see that his animated guests were having a good time. Kristen was crying now in that cry we get when we think the world will end and us with it. I kept waving. Eventually the men in the boat reeled us in like fish.

Kristen walked shaken and wind-battered to our room, and fell into a deep infant-like sleep. When she woke, we sat together on the couch.

Mom, I can’t do this with you anymore, she said, exasperated. I can’t go running off with you on all the crazy adventures you dream up. This is it. This is the last one. I’m a woman now and get to say, no!

I’m sorry, I whispered, I just thought it would be fun.