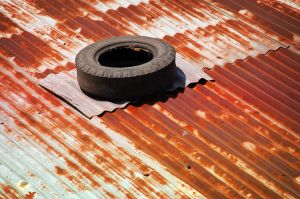 Saturday morning my husband Gib listed his truck on Craig’s List. He put it in for $1,300 because it needs work. The truck was full of Gib’s stuff, because he is basically a trasher, so it was a real mess. I told him last week-end that we should clean it out, but he was not up for it.  Gib gets a call as soon as the ad hits the net from a guy that lives basically as far away from us as he can live and still claim he lives in Portland. They talk and he makes him an offer of $1,000, which is fine with Gib. Gib offers to bring the truck to the guys house in two hours. “Bring the truck over and I’ll go get the cash!” This is Saturday morning and we are sitting around in our pj’s.

The truck is over by the pole barn, so we walk over and start to unload it. It is full, full, full of his crap. Gib: Gee, I guess we should have done this earlier. Me: No comment.  There are locked boxes in the back where he stores his camping equipment: sleeping bags, chairs and tents. Of course, this is mixed with tennis balls, old socks, tools, and tavern receipts. When he opens the box the worst smell comes out. A mouse or mouse family have lived in there, been pooping and dying and have eaten ALL of his camping equipment. The smell is overwhelming, an odor mixed with mold from sitting too long in the shade of an Oregon winter.

So we start pulling stuff out and tossing it to the ground. Gib is throwing wood

screws out the back of the truck into the gravel where we’ll have to hunt down each one, so the gardeners don’t get flat tires.  More work.

We drive the truck to the house and get soap and the vacuum, both of us gagging on the smell. The front cab is also covered in mold, and more of Gib’s twelve year old way of storing crap. Meanwhile, it’s nearly two, and I’m saying, “This guy is waiting, give him a call!”  Gib is SO attention deficit disorder he can only focus on what’s right in front of him, everything else gets lost. We are hours away from done, so I keep saying, “time to call him, time to call him!” He calls at two, and tells him three thirty, which I think is terribly optimistic.

Gib tells me he still wants to get the oil changed and go through the car wash. I tell him to let the new owner do that, but he is determined; plus the clock is ticking, we are going out that evening and need to be dressed and ready. I load the crap we took from the truck into my trunk to dump it in a dumpster, but Gib doesn’t like that idea, because he’s not ready to deal with that part yet, so I haul it out again. Finally, after mopping the ceiling, sides and floor of the truck it looks okay. I spray air fresher in there, but it has the same effect it has in the bathroom. You still smell the shit, it just has an artificial smell laid on top, even worse. We use Windex on the windows and that helps.

Time to get our evening clothes and run. No, Gib needs a shower first, and advice on what to wear to the concert, and he can’t find his belt….anywhere. Finally, we are on the road with me following him in my car, but guess what?  The truck needs gas, so we pull into a station. I’m thinking, knowing Gib, that he is probably filling it up instead of putting in ten bucks. I want to yell at him, but am all yelled out.  That’s done. We make it to the oil change place, but they have long lines and an hour wait. It’s an oil change and car wash. Gib says he will take the wash only, but they say they only wash cars that have had an oil change, but he has already pulled in and there is no road around, so they have to let him go through the wash, because the truck has no reverse, except in the morning when the weather is cold, which is why we are selling it in the first place! The guys at the car wash are not happy. They don’t know how to handle it, so they talk about it for a loooooong time.

I wait for him to go through the wash. We are on the road again. Oh, nope. We are not. Gib pulls into a Shell Station to buy oil. He parks the truck so it blocks all the gas pumps and slowly walks inside to buy six dollars worth of oil. Cars are waiting to get gas as he leisurely pulls the dip stick out, wipes it clean and makes his assessment. Okay, oil in now. Old man blocking gas pumps has been politely tolerated by everyone in the long line that reaches out to the street.

Now we are ready to make the long drive to this guys house. I honk my horn really loud because Gib is pulling the truck into the side of a bus…..~!  “Didn’t notice that Karen, wonder where it came from.” 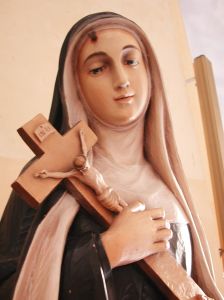 We get to the guys house and he lives in scumville, because he is a scum. He hops in the truck with Gib to test drive and doesn’t come back for a really long time. He offers Gib $500 and keeps Gib in his clutches, while he does his slimy salesman routine.  They walk to my car and Gib tells me what’s up. I hit the ceiling!

“What, we drove this truck all the way over here so he could break his word?”  The guy is still talking to Gib. “We had a deal!” I say, “The deal was for $1,000.”  The guy has Gib’s keys and doesn’t want to give them back. I said, “NO DEAL!!!” Gib smiles, and says, “We all have wives. You know how that goes.” He is leaning on me, because he doesn’t know how to get free of him. He finally gets his keys back and we pull out, both of us shaken by his Mafia manner.

Stressful… Now we have two vehicles, so we take the truck to my daughters house and park it. We’ll put a For Sale sign on next week. It’s time to meet our friends at the fancy restaurant for dinner. I don’t even bother to change, just go as I am, because I’ve had it. I order a coffee drink and good food, the day is looking better.

The show afterwards is fabulous. Flamenco dancers from Spain. Unbelievably beautiful, but I’m having trouble staying awake. We get home at midnight and suddenly I am wide awake and so is Gib, so I begin doing a sketch in my art pad, and he does some computer work. It’s two o’clock in the morning and we HAVE to go to bed, but somehow we are not tired. At four, I am still laying in bed going, I must sleep!, but can’t. Finally, we sleep.

My daughter calls at eight the next morning to see if we’ll help her paint a bedroom. Sure, why not? Half awake we drive into Portland again, stopping to dump all the crap from the truck in a big dumpster outside a manufacturing plant. Illegal dumping. Gib is fumbling around with the lid, being nervous and looking over his shoulder. He makes a horrible criminal. He has no skill at it at all.