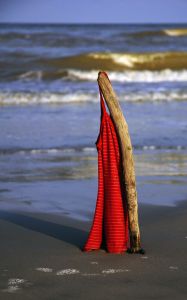 My kids both went to The Metropolitan Learning Center which is an alternative school in Northwest Portland. They grew up in a bohemian single-parent lifestyle with an artistic mom who was away, in rehearsal or touring with theater companies.

When teacher conferences rolled around, nobody wanted to be stuck inside, so we all agreed to meet at the naked beach on Sauvie’s Island, where we could talk, tan and enjoy the sun.

The teachers discussed their latest field trips to Mexico, whatever art project they were working on, and how the kids were doing in school, while full scale volleyball games were  played on the shore and tugboats motored up the Columbia River.

The naked beach was relaxed and easy. Those who were fearful soon learned that their bodies were just bodies, like everyone else’s, nobody had a perfect one and nobody needed to feel ashamed. Being there was liberating.

My son was an adolescent at the time and uncomfortable on a naked beach, but felt inspired to hide on the hill with his friends to enhance his knowledge of human anatomy and upgrade his education from lifeless playboy centerfolds to the real thing.

I walked the shore with my friend, B’Lou on my right, who was busy smoking long brown cigarettes and listening to the walkman she’d strapped around her waist. Carolyn was on my left, with a large straw hat and lots of proof that her bright red hair matched the hair on other parts of her body.

Hey, check out those women, one of them said.

Clay smiled until he realized the woman in the middle was his mom, then jumped back like he’d been kicked by a horse.

Hey Guys, this isn’t cool anymore. Let’s get out of here. I don’t want to do this anymore. The whole thing is grossing me out.

The boys were reluctant to leave, but Clay insisted. It took him a few days to tell me what happened, and he never quite looked at me the same again.