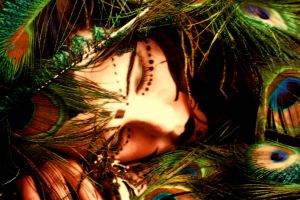 I had a friend named B’Lou, short for Betty Lou, who was an incredibly gifted, intense and sharp-edged woman. I met her when I sang in a Rock Opera at Storefront Theater. We became fast friends. B’Lou cut her hair short, smoked long brown cigarettes and had the lean styled body of the professional dancer she was. She was aloof, elegant, and both baffled and alienated by the culture she lived in. We shared a background in the arts and many long afternoons in her costume closet.

B’Lou either liked you or she didn’t, there was no middle ground. If a person had artistic qualities, or if the men were gay, she sensed a potential friend and playmate, then her world was welcoming and wide. But if people were not on her preferred list, she could be rude and distant. They were greeted like a bug in her caviar.

B’Lou always had strange and unusual ideas. For instance she thought it was great fun to put on a costume and parade with friends down the street like Princess Di, smiling and waving a mindless regal wave. She taught movement classes and encouraged students to go to a near-by shopping center to create as many variations of walking as they could think of. Ultimately, security guards arrested her for walking backwards too long; they found it threatening and unnatural.

I made my way through prize dahlias and artfully sculpted foliage to seek her advice. I needed a place to live but had no income. I don’t know how to move without money, I told her, but I have to leave. The only place I’d found to stay when I came back from touring was in the house of an x-husband. She looked intently at the end of her long brown cigarette. You obviously need to leave, she said, we have to figure out the funding. Her face lit with an idea. Henley is having his house foreclosed, but that could take a very long time with the legal procedures. Maybe you could move in there. It would not be ideal but it would buy you some time.

I don’t even know Henley, How can I introduce myself and say that I’m interested in living in his house rent-free, until his life self-destructs? Seems a bit much, don’t you think?

No, not really. I’ll take care of explaining it to him.

Henley had the corner house next to B’Lou. I liked the idea of being neighbors. Of course you’ll have to clean it, she said. Henley is a trasher of the highest order. Be prepared for that. She knocked an ash into a large crystal bowl and welcomed her Siamese cat into the folds of her sweater. The other reason this could work, she continued, is because Henley is interested in metaphysics. You could teach him in exchange for rent, if you are both in agreement.

When I showed up for our meeting, I met a man whom I can only describe as alarming. He looked like he’d been foraging through garbage cans all morning, the zipper of his trousers was undone and he was dirty and smelled. I was not impressed. As I sat across from him, I thought I would sooner land in the gutter than share a space with such a man, free or not.

To my surprise, when he spoke I discovered an intellect that bordered on genius. He was regal in his mannerisms and remarkably knowledgeable. I wondered how such a man could have fallen so low. Henley had been an internationally known ice skating coach, who still received calls from Olympic hopefuls. He had lost his father, thought he had cancer and completely bottomed out. Something snapped and he stopped functioning, stopped working and thoroughly neglected his appearance. The ironic part was that he was totally optimistic.

Henley lived on the second floor and told me I could have the first, which had its own entrance and plenty of privacy. The furnace was hopelessly broken but a woodstove in the main room provided heat. The building was a lovely vintage home which had fallen into the same disrepair as its owner. Uncontrolled blackberry bushes covered the sidewalk; the front porch was piled with garbage, old magazines and official looking threats from the city. He opened the door to a black and white tiled entryway, a large living room, two bedrooms and a kitchen. The backyard looked like the front, overgrown and untended. He had junk, refuse, discarded garbage, dirty clothes, and smelly debris knee-high inside.

What should I do with your things, I asked while trying a new technique of breathing out and not in. I’ll throw everything away unless it looks valuable.

He moved through the space as if he were in a meadow. I don’t care, he told me, do what you like.

The next two weeks were spent hauling away garbage, scrubbing walls and tiles and waging a battle with blackberries. I made my way through the lower part of the house, while Henley studied philosophy and metaphysics. It was hard not to hate him for the squalor I worked in. I scrubbed and disinfected while saying to myself, Henley, you Idiot. How could you let his happen? How could you live like this? How can you stand the odor?  I’d fill great black garbage bags with untouchable belongings and he’d come up behind me, thrust a tarot card over my shoulder and say, What does this one mean? He was oblivious.

This is not the best time for me, Henley, I’d explain gritting my teeth. Could you wait a few minutes? He was obsessed with curiosity.

If I got money from a reading or from the rare arrival of a child support check, we’d go shopping. I’d buy him shoes that didn’t leak, warm socks and food. The first time I took him to dinner, I told him to order anything he wanted.

Do you mean it, he asked.

He ordered three separate meals plus dessert. He hadn’t eaten in a long time. I knew that B’lou also fed him but most of the time he lived on coffee, and the mental pleasure of books. I wasn’t paying rent, couldn’t afford to, but shared what I had with him, and he was good to me.

One afternoon sitting in B’Lou’s hot tub I inquired. Why do you think Henley is the way he is? He’s so smart but completely checked out. I care for him but don’t understand him at all. We were soaking in evening air underneath a cedar tree. The yard was lit with candles. B’lou’s eyes reflected light as she answered. Karen, we’re all case studies of sorts. Henley’s file is just a little thicker than ours, that’s all.

Eventually things turned around. Henley owned several pieces of professional work-out equipment. I talked him into selling them so he could use the money to live on. He had a friend who began making arrangements to save his house. I cleaned and rented the attic space to a chiropractor who could afford to pay rent. Things were looking up, Kristen and I settled in.

B’Lou managed to place friends in bordering houses when they came up for lease, so we had a community. We gathered at her house on Sundays to share food, talk about our lives and the latest creative projects that might save us all from poverty.