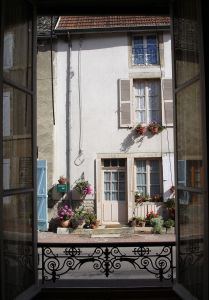 I must have been such a pain in the butt, but Elise was an exciting cook and I simply did not want to leave the table.

I was in Vincennes visiting relatives, Claude, Elise and their four year old son, Gilles.

Growing up in a restaurant, I was accustomed to good food, but was completely unprepared for the culinary delights of France.

Each morning I would follow Elise through open air markets, as she slipped fresh fruits, vegetables, fish and bread in the small string bag over her arm. I had never seen pastries like the ones displayed in the windows. They were works of colorfully displayed art, ready to be tasted and moaned over.

The baker was covered in flour as he stood in the door of the boulanger, smiling and looking satisfied with his work. Two years of high school French had not prepared me for conversation, but I felt the gist of community as he handed a baguette to Elise fresh from the oven. I was surprised to see them sold without the clear wrapping of breads at home. Customers carried them off on the back of bicycles, and tucked them inside packs with no regard for protection. Great chunks of artisan cheese made with whole unpasteurized milk were handed over the same way.

I had just left boarding school and had a summer before I began studying music in Cambridge. Elise and Claude wanted to show me the sights, which began with the famous Vincennes Medieval Castle which loomed above city streets. That summer we took the metro to Paris and saw the Louvre, the Eiffel Tower, the Seine, Jardin de Luxembourg, Notre Dame, and the Arc de Triomphe, but I had little interest, because I had been hopelessly seduced by the cooking of Elise. It was all I could think of.

When Claude asked what I wanted to visit each day, I told him I didn’t care. I just wanted to eat anything Elise would make. She stood over her simple wooden table, chopped, whisked, and tossed, stopping only to wipe her hands and push a lock of black hair from her forehead. I was in a pool of sensual pleasure and hoped to drown.

Smells of fish sautéed in butter and white wine wafted out her window as fresh herbs splashed in and out of the pan making sauces I had never imagined. I was introduced to the exotic unknown flavors of saffron, shallots, fennel and leeks. She braised white onions and caramelized mushrooms, boiled a rich sauce with blood red burgundy, and served steaming bowls of boeuf bourguignon. Crusty loaves of bread ripped by hand soaked the juices.

Dessert came in white ridged dishes of golden-brown crème carmel, or chocolate mousse with gobs of rich cream on top. The house filled with smells I had never known each time she donned an apron. Elise did not seem a gourmet cook, I am not even sure she took pleasure in it. She was simply preparing the daily meals for her husband and child. In the end, her kitchen was the only part of France I wanted to know. She had ensnared my young taste buds and opened a whole new world of pleasure. I’m sure they were relieved when it was time for me to leave for Salzburg. I had been a ravenous freeloader.

I never forgot the sensual delights of my summer in Vincennes. After several weeks of over-indulgence and added weight, I flew to my school in Salzburg, where I traded the poetry and passion of France for a German class, where every word sounded like an execution.

One thought on “France and food”