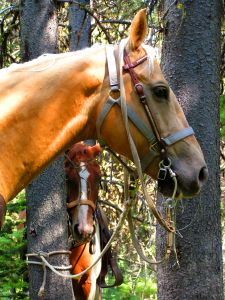 A brightly colored mural hung above the stable door, as I led my white Tennessee Walker, Nashua, out of the warmth of her stall and into the day. The mural was a product of my oldest sisters journey into the world of art. It was an abstract something, I didn’t know what, but I liked it, because it lent bright colors to an otherwise dull wooden barn.

I threw a western saddle over Nashua’s back and listened to the prancing of my sister’s horses, who were eager to be let into the pasture. My oldest sister, Mary Ann had a palomino named Lightning, named for his color, and my younger sister, Kristen, had a pinto named Nippy, because he was rude and liked to bite people. A horse named Nashua was a big winner at the Kentucky Derby last year, 1955, and I dreamed big, so I gave my horse a name to live up to.

Small ice cycles formed in my nose as I tightened the synch around Nashua’s girth, slipped my boots into the stirrups and grabbed the reins. I tucked a muffler around my neck and pulled a wool cap over my ears. I was amusing myself by blowing clouds of moisture into the air like cigarette smoke, when I saw Tubby’s big Oldsmobile pull in the parking lot. My parents had a restaurant nestled into the rolling hills of upstate New York, and Tubby was the cook. He was showing up for the breakfast shift.

Hey, Tubby, I yelled. Tell Mom and Dad I’m headed to the farm and will be back tonight or tomorrow. The body of Tubby’s car rose a foot as he lifted himself out. Without a glance in my direction, he raised his hand to let me know that he’d heard  and would tell somebody inside. Uncle Tubby, as he was affectionately known, was a retired army cook and his delicious military size portions were the reason the restaurant was so successful, that and the fact that my parents never stopped working. They had little time or energy to see how five kids passed their days, so at age 11, I ran wild and did exactly as I pleased.

I inhaled the fresh smell of snow as we made our way past a marshy clearing and toward the dirt road beyond. The crunch of each step left a well marked trail. Morning sun was peeking out of heavy clouds and the steam from each breath we took rose before us. We made our way over fallow fields, which would be impassable in another month. I knew from experience that a spring thaw would sink the horse fetlock deep in mud, her hooves making big sucking sounds as she worked to free them. Nashua made little grunts and snorts as she labored up the steep incline of the hill. Cars knew better than to drive this road in the winter. They had no chance, but a kid and a horse could make it every time.

The smell of leather and pine filled the air as sweat formed on Nashua’s hard working back. She made her way up the road stumbling, but always catching herself on the cinders and frozen gravel that clung beneath the snow. Once on top, a full mile was cut from the five mile journey by crossing a neighbors acreage. He was not a friendly man. We rode carefully along the encrusted bank of his land, around abandoned crops and under maples rich with sap. Barren branches held droplets of water as the day warmed and the sun rose in the sky, making a distinct outline on hanging branches and snow crusted thickets. Audible sounds of melting snow trickled near by as  birds chirped from tree to tree. We continued past the broken stalks of last years wheat, until we came to the main road. It wouldn’t be long before I’d see my uncle’s cattle pastures and hay fields. I brought the horse to a trot, eager to arrive.

The pond came into view on my left, and finally the buildings themselves. My uncle was standing in his heavy winter coat and cap, his hands in leather gloves, twisting and turning large silver milk cans on the platform for pick up. He was radiating good health and cheer as he caught my eye and waved. I watched him make marks on a clipboard, and hang it on a wooden peg before going back inside. Aunt Ethel was sitting on a three legged stool squirting the faces of six cats with warm milk from a cow’s utter.  They licked and pawed it into their mouths with looks of delight and satisfaction, then gathered around an old blue bowl which had been filled to the brim with cream. Ethel unlocked the last cow’s head from the stanchion, and sent her with a pat on the rump to join the rest of the herd. The last cow, Daisy, twitched her tail in response and lumbered down the stair into a fresh bed of straw.  Each cow had a distinct personality and names given according to their birth month.

Fur lined boots met my aunts bare knees, as she pulled against her cotton dress, found the hem of her apron and wiped the milk from her hands. I’ll be damned, she said. Look who’s here. Come into the house.

A large silver boot jack in the shape of a bug was attached to the floor, and  helped pull tight boots from layered socks. We hung our coats on the screened porch and shook the weather from our pants before entering. Glenn and Ethel had been up since 4 and were ready for a cup of english tea. The front door opened into a kitchen of ticking mechanical clocks. A french marble clock set on the kitchen mantel, above a gentle fire. Next to it, was a brass and glass regulator clock, a woodcased steeple clock and a Seth Thomas pillar and scroll. A multi-colored parrot screamed ‘Hell-oooo from an open cage, as my uncle moved to place a fresh log on the fire. Ethel had wallpapered the ceiling with brightly colored lilacs, and painted kitchen chairs a deep lavender to match. A nine foot hall clock stood next to an imported pianoforte in the living room, while an old school clock ticked above the free standing sink.

I counted the ticks and tocks of the clocks, as I lathered my hands and reached for a towel to wipe them dry. The smell of black tea filled the room, as homemade preserves and bread were added to a table set with blue willow china. We ate and shared news, until it was time for Glenn to transform himself into the manager of the Chemung County Airport. Excuse me ladies, Glenn said as he pushed back his chair, and delivered his cup and saucer to the sink. Time to go to work. He disappeared through the living room into the bedroom.

I looked at Ethel as she drained the remaining tea from her cup. Glenn was my father’s brother and Ethel was, to put it mildly, a thorn in the side of my mother. My mother was an astute business woman and spent considerable time each day tending her appearance, while Ethel was the only woman in town to get her hair cut at the barbershop. She wore a bright red coat she closed with a giant silver safety pin, and completed the outfit with black rubber boots. Make-up was out of the question.

Finish your tea, she said, Time to see what the future holds.

I obediently drained the liquid from the cup,  twisting and turning it, making patterns that I hoped would be many and varied. It took skill to use my teeth as a strainer and keep the leaves out of my mouth, but I’d had plenty of practice. When we were both ready, we turned our cups upside down on a napkin, gave them a few seconds to drain, then righted them again.

You go, she said, read for me first.

I gazed at the images left in the cup, the way one looks at cloud formations, and let my imagination soar. The best thing about this game, was that we were never wrong. Everything we saw was in the future so we could never be wrong. We had full permission to say whatever came to us, without being discounted or judged. It was something we always did after morning tea, in the same way my uncle always reached for a fine cigar after dinner.

I see lots of birds cold from winter, I told her, looking at huddled little clumps of tea.  They are ready for spring to come, so they can play in the cornfield again – and here is a letter coming in the mail, and a visitor, a man with a hat is coming to visit you very soon. A square grouping of leaves looked like a rectangular letter, and another resembled the profile of a man in movement, one knee raised as he walked. The letter part always seemed to be there. The postman drove in the yard most days so that perdiction was a sure thing.

The man with the hat is kind of skipping, I continued. He’s a happy man. You’ll like him. It will be a good visit.

Delightful, she said, smiling and clasping her hands together.

My uncle made his way through the kitchen in a tweed jacket, dark pants and cordovan shoes. He smelled of shaving cream and fresh straw as he bent to hug me goodbye. I loved nestling my nose into the warmth of his neck and lingered as long as I dared. In a moment, he was gone, the heavy spring on the door slamming it’s wooden frame back into place.

Alright, said Ethel, continuing our game. Let’s see what you have now.

She reached for my cup, curled her weathered fingers around it and studied its contents.

OH, my goodness! This is good news!

I perked up, sitting on the edge of my chair. What is it? What, what, tell me!

She bent forward and showed me an outline of a steep hill, and what appeared to be seated people flying down the face of it, loose tea leaves spinning in their wake.

Yes, yes, I see it, I replied. It’s definitely sledding.

She closed her eyes for a moment in dramatic silence, then pushed back her chair and walked to the pantry. I have just the thing, she said, popping her head from behind the door. I waited in suspense, listening to drawers and cupboards being opened, searched and closed again. Finally she came out, delight beaming from her eyes, something hidden in the fist of her hand.

Close your eyes and open your hands.

I did what I was told, while she placed something glass and cold in my right hand.

What is it? I asked again, opening my eyes.

Gold leaf, she whispered, full of intrigue and mystery. Gold leaf. We’ll paint your name in gold leaf across the top of your sled.

She unscrewed the cap. Golden glittered paint oozed from the small brush in her hand and dripped back into the bottle.

We’d better get busy painting this afternoon so your sled will be ready when you need it. 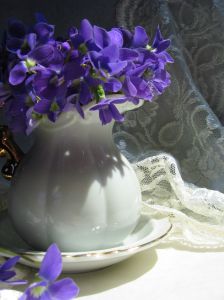 After tea and fortunes we went into her room and settled on top of the bed, where rays of soft morning light made intricate patterns as it filtered through lace curtains, coming to rest on a linen table cloth and rows of potted violets. I nested in her arms, pulled up the patchwork quilt and listened to radio shows, as I drifted in and out of sleep. A row of my uncles calfskin shoes were paired near the foot of the bed, all meticulously polished and ordered. I fought to stay awake.