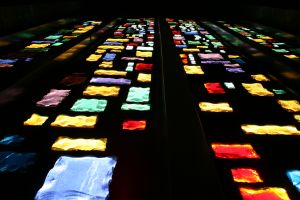 The first thing I ever stole was from the Baptist church. It was Christmas. We were given sugar cookies shaped like stars, steaming hot chocolate and bible lessons. Brightly colored packages circled the tree in the entryway, one stacked on the next. Those were not for us.

After the final prayer the other kids exploded with freedom, pushing against tall wooden doors that opened into snow and afternoon light. But I stalled in the lobby, mesmerized by the tree. Surely, one of those presents was meant for me. I was drawn back to them full of longing and larceny. The lobby was still and quiet. Perhaps, I thought, I could take a tiny one, one that would not be missed. I bent down and helped myself to a small rectangular box. It was wrapped in green paper covered with snowmen wearing black top hats, buttons of coal, carrot noses and big smiles. Yes, I decided. This was the one. I buried it in the well of my pocket, deep beneath my mittens. Then I sprang from the door like Satan himself was chasing me. I ran through snowdrifts up to my knees, went bounding up the stairs of my home, down the hall and locked myself in the bathroom. I was breathing heavy, afraid the God police had been alerted. I listened for footsteps but no one followed. The house was empty, so I tore open my surprise and……. my heart sank. Inside was a tie clasp that said, JESUS SAVES in shiny silver letters. A tie clasp – for a man! I couldn’t take it back. What on earth could I do with it? In a moment of generosity, I rewrapped it.

My dad was tending bar in the restaurant below when I climbed on a bar stool and told him to close his eyes. I have a gift for you, I said.

Where did you get it?

From the Baptist Church. They were giving out presents for dads.

I placed the torn green snowmen in his hands.

I wanted to make sure it was right.

He lifted the tie clasp with JESUS SAVES in shiny silver letters out of the box and bellowed, Jesus Christ! What the hell am I supposed to do with this? For crying out loud, Karen. JESUS SAVES? What were you thinking?

There was a moment of tense silence before he clipped it against his shirt and tie.  What the hell,  he said and went back to mixing drinks.