Nancy had lots of psychiatric labels when she came to see me; bi-polar and borderline personality to name a few. She was thirty years old, severely overweight and had an attachment disorder that compelled her to phone her father several times every hour. Nancy came for healing at her father’s request.

When she sat down the generator outside the window burst into life, roaring with deafening noise. The button on the tape player refused to stay in the record position, the microwave engaged, the dog began barking and a neighbor knocked on the door. It is not unusual for children with psychic abilities to cause such disruption, but this was a different energy. When I closed my eyes to read for her, I saw the spirit of a large unbalanced man who was sharing her body.

Nancy had been so labeled, treated, medicated and repressed by the medical system that she’d lost all sense of health. Together we found and enforced her healthy-self and brought it back into consciousness, so she had a frame of reference to begin our work. I spoke about spirit possession, and asked if she was aware of it.

I have always felt there was an uncontrollably violent part of me, she said, that is living my life. I do things that frighten other people. When it’s happening, it feels like I get pushed aside, as if someone else is doing it. Then I wake up, look around and wonder what happened.

Nancy went away with a new understanding and spiritual perspective which gave her strength and encouragement, but I knew I couldn’t make progress until the spirit was removed. 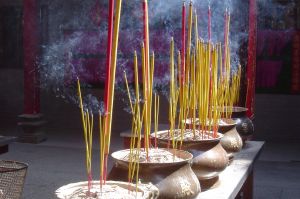 I have always seen spirits. For some reason, I vibrate with a higher energy frequency, an openness and sensitivity that allows sight into realms that don’t exist for most people. I have been called to remove disruptive spirits from houses and from clients like Nancy in the past. I do it by quieting, closing my eyes, and allowing them to come into vision. I witness their story, all of which plays like a movie inside my head. I am not always successful in this work, but when there is success, the spirit moves on and their absence changes the person’s life for the better. The spirit I saw in Nancy felt large, male and violent. I didn’t feel that I was strong enough or capable enough to move him out, so I began to research someone who might do it for me.

I heard about a medical intuitive from a friend, and asked Nancy if she would be interested in going.  After Nancy’s visit, the healer informed me that there was no problem at all. If there were I would have seen it, she said. Her casual approach and ungrounded confidence led me to believe that she had no skill in that area at all.

I asked for help from a healer from the Lakota tradition, but he was full of ego and wanted Nancy to show up for weeks of training before starting the work. That would never happen, so I passed on him as well.

I was walking in downtown Portland with my friend, Cora, when we happened upon Nancy. After she and I exchanged pleasantries, Cora looked troubled. Who was that woman, she asked? She has such a dark energy in her. It feels male and angry, like it’s been with her a long time.  Cora’s words were helpful, because it’s easy to doubt myself when I am the only person who sees what I see. I have learned to trust, but there is still the loneliness of a work that is not easy for others to comprehend or share.

I continued to search for the right person for a full year. I asked a local clairvoyant, who is excellent with predictions, but found her uncomfortable with thoughts of possession. I asked a Catholic friend if she knew a priest who was capable, but got no reply. In my frustration, I encouraged myself to do the work, but a wiser part knew that I was out of my depth. This spirit would take a strong masterful personality, not a gentle feminine one.

My daughter and granddaughter live in an ashram, and mentioned that the Abbot, Swami 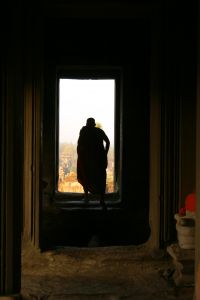 Chetanananda was returning from a year in Tibet. The term Swami, means teacher and bringer of light in Tibetan Buddhism. I had not met him before, but encouraged Nancy’s father to seek an audience  and explain the situation. He and Nancy went together and I came later. The Swami is a large bodied man, over six feet tall, who has devoted his life to spiritual practice and mastery. We talked about spirits and spirituality. He confirmed my vision and agreed to meet with Nancy for three puja’s, or healing rituals, where he would release the spirit. I was extremely grateful, since it is rare for the Swami to attend the healing of an individual.

It is not uncommon in healing for things to get worse before they get better, which is what Nancy reported after the first session. She exploded in anger and was crippled by migraine headaches. During the second puja, the spirit was released and the third brought her back to normal.

Nancy is a different person now. She no longer lives in cloaked avoidance of light, but seeks it. She can function, react normally, is no longer violent, and no longer calls her father for constant assurance.  She is in school, doing well and working two jobs. When the spirit entered, at about age twelve, her own development was arrested. So she and I met to repair her sense of self, and make sense of many troubled and forgotten years. There is more work for her to do, but that is in the future. For now, she is happy to have joined the world and I am happy for her.