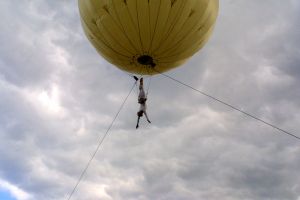 What is that instant connection with another person; that sudden timeless knowing that you know or have known each other; that warm immediate acceptance that feels like a welcome reunion between strangers?

It’s not exactly falling in love, but it is a falling of sorts, perhaps into the eyes of another’s remembering. This mysterious bonding can happen anywhere, with anyone, at any age. It’s a rip in reality as we know it, an opening, both uncommon and familiar.

Her midnight eyes caught my attention, not the color, but a spark, a flash of light; an almost tangible electricity. Our meeting took less than a moment as we walked in opposite directions along a quiet ocean shore.

Her name was Lydia, eight years old and going into fourth grade, but I wouldn’t find that out until the next day. Now all I had was the flash of recognition that we once knew each other and wanted to again.

Lydia’s long brown hair spilled over her shoulders in full waves of curl, accenting her vibrant turquoise jacket and pants. She watched me watching her, as she planted her hands in the sand and rose barefooted into a cartwheel, then another and another still; her young legs never quite extending above her confidence. She looked back as if to say, Did you see what I can do? What do you think of that? Pretty cool, huh?

Her parents walked beside her. Her father, a slender man with early grey hair, her mother average and withdrawn. They walked happily forward, insular in their privacy. Lydia shot me a knowing smile, she was an obvious beacon in their careful lives. That was Thursday night.

I was at the ocean with my granddaughter, Isabella and my daughter, Kristen, having a mother-granddaughter vacation. I kept Lydia in mind as a playmate for Isabella, deciding to introduce them if I saw her again.

On Friday we rose eager to walk and explore the shoreline. The tide was out and small bodies of water dipped into little pockets of discoveries. Isabella found several starfish in purples, reds, browns and blues. She pocketed countless agates and two hard earned sand dollars. We climbed cliffs and discovered new views, Bella always staying behind to make sure I got up without trouble. I’ve got ya, she’d say, extending her hand over rocky terrain. When did we switch roles? I wondered. When did I become the one falling behind and not her?  The ocean air invigorated our spirits as we made our way back for lunch.

It was late afternoon before I saw Lydia again. Isabella was flying her multi-colored bug kite, the one with the curly tail and face that reminds me of a protective Hindu God. Lydia watched from afar, then pulled 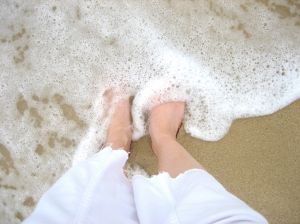 out a pocket-sized kite of her own, a dragonfly trailing yards of shimmering gold metallic. Both girls ran as only the young can to keep them airborne. As the kites slowed and fell to earth, I took the opportunity to introduce myself.

I know you, I said running next to Lydia, You’re the girl that did those amazing cartwheels on the beach yesterday, aren’t you?

She did not lower her eyes or pull back in shyness. No, she met me eye to eye drinking in our conversation like the desert wanting rain.

Yes, that was me, she said. I’m eight years old and going into fourth grade. I’m here on vacation and I’ve been here before. We live in Washington. We came here last year too, only it wasn’t so cold then.

Her face lit like the sun itself, radiating light in all directions. I loved watching her generate words from her inner excitement and give them to me, like small wrapped gifts from an unseen self.

I do lots of things, she continued. I study gymnastics and learn piano from Miss Barker. She’s been my teacher for two years and she lives in the brown house just down the street. It doesn’t take long to walk there. She has a really small dog with red hair who waits for me by the corner of the house. His name is scruffy but he is not at all scruffy. You would like him, I bet. Have you ever been to the ocean before?”

I come to the ocean every few months because it’s a short drive and beautiful in all kinds of weather.

The ‘every few months’ part struck her as impossible. She was mulling that over when her mother approached.

People can do that when they live near-by and this woman does not know who Miss Barker is, Lydia, nor does she care. Lydia’s father stood next to her now, joining forces with her mother like a bucket of water waiting to extinguish light.

We have a nice fire going, I offered, and plenty of marshmallows, if you’d like to join us. I’m sure Lydia’s as good at roasting marshmallows as she is at doing cartwheels. She beamed in my direction, unable to contain her excitement. Can we mom, can we?

We’ll make a fire before we end our vacation, her mother promised. An indirect and unchallenged refusal.

Are you enjoying your time here, I asked.

Now we are, the father offered, but we had to move our lodging when we first arrived because the landlady was getting too friendly.

Lydia looked at me for a moment and beyond to distant flames that spit and rose in the air.

Perhaps we’ll see you out here tomorrow, I said, It would be nice for the girls to fly their kites together.

chairs in one arm and Lydia in the other.

I’ll be here tomorrow, Lydia said eagerly. I’ll be here at 9 a.m. and if you want to, please come get me. I’ll be in cabin 18 ~ right over there. Her eyes were saying, I want to go home with you, as her body turned in reluctant compliance.

We didn’t see each other the next morning. She was not on the beach, but my daughter saw her later that afternoon while I was resting. Yes, they played together for awhile, Kristen said, but Lydia had to leave. She gave Isabella a butterfly kite as a goodbye gift.

How were the parents?

And that was that. I never saw Lydia again and don’t expect to.

But here I am two days later writing about her. She is on my mind. She left an impression. I’m pondering her journey through life and what it will be like as she reaches toward the cornucopia of the world, while her parents diminish the flow to crumbs of fear and safety.

Lydia is a child living in radiant color next to shadow people. I wonder what affect that will have. I wonder if their fears will come to own her, or if she can use their example to push past them, into her own growing wisdom and remembered knowing.

But most of all, I wish I’d had a moment with her; a small island of uninterrupted time when I might have spoken into those clear receptive eyes; when I might have spoken with the freedom people have when they recognize each other from another time and place. I think I wanted to tell her that it will all be okay and that there are others like her here. I wanted to say, Don’t worry dear, you are not alone.