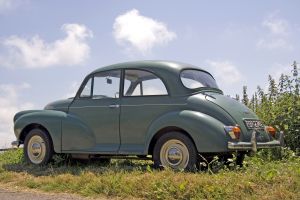 I bought a Morris Minor when I was eighteen years old. It looked like this one, only mine was a baby blue convertible, had a black racing strip and mirrors on front fenders positioned to show my hair at all times. I saved my waitress money until I got five hundred dollars, plopped it down at the dealership and drove away. Well, sort of drove away, but not really, since I never took it for a test drive and had no idea how to drive a stick shift.

The car was a point of contention with my dad. I’ll buy you a car, any car, but not that thing.  You’ll never get parts. Buy a Chevy. I’ll help you. Those foreign cars are crap. Turns out he was right, but I didn’t care. That ‘thing’ was what I had to have. The salesman waved and honked on his way home from work two hours later, as I sputtered along on the shoulder starting, stalling, and stopping. What the heck do I do with this clutch? He pulled over and gave me a lesson.

Most people don’t know what a Morris Minor is, but my husband knew. Turns out he had to have one when he was a teenager. He and I have the same birthday, the same karmic patterns, and the same taste in cars – one of many bizarre parallels that run through our lives.